If you wish to donate to either of these funds, visit giving.sc.edu/arboretum or write a check to the USC Education Foundation, 1027 Barnwell St, Columbia SC 29208 and indicate in the memo field the name and number of the fund. 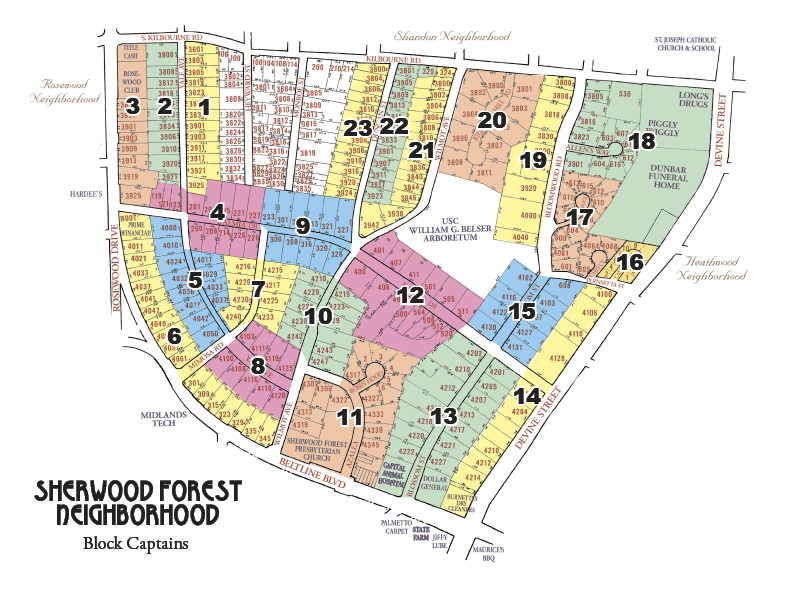 Click on the map for a more detailed PDF version.

Sonya Hodges spoke to the group about trying to reclaim a long forgotten cemetery that is located behind Intertape Polymer Group on South Beltline. What began as a project to compile Hodges’ genealogy has become a mission to honor the African-American infantrymen trained at Fort Jackson and delivered to the blood-stained trenches of France in April 1918.  Read more here…

MPO Kevin Schmidt gave his report on crime in the neighborhood. There have been no auto break ins or burglaries since April. Shandon has had 7 auto break ins and 8 burglaries. Old Woodlands has also had several. The auto break ins occur when people leave valuables in plain view in their cars. Officer Schmidt repeated that cars should be locked and all valuables removed. Officer Schmidt asked us to look out for the activities of a white man with auburn hair who rides a bicycle. The police feel that he is stealing things as he rides around the different neighborhoods.

Henry gave the treasury report. Cameron Court, which is part of Sherwood Forest, gave the Association a check for $180. This amount covers the dues of all the people living in Cameron Court. We now have $1100 in our checking account. Henry talked about our problems regaining our 501 (c ) 3 status. Many forms need to be filled out, and we would have to pay $400 to the IRS. Henry researched whether we need to have nonprofit status and found that neither the Shandon Association nor the Old Woodlands Association are nonprofit. The city has never required that we have this tax status so the best decision appears to be giving up the nonprofit status. Henry is checking with legal counsel to make sure there are no problems with this decision.

Henry reported that Sherwood Forest will soon have rolling dumpsters for our recycled materials. They will be much like our current garbage dumpsters, but they will only be picked up every other week.

Sherwood Forest is responsible for the gardens on the outside of the Arboretum both on Wilmot Street and Bloomwood. Henry will send a check for $360 which is the yearly fee for the maintenance of the gardens. Several members asked who is responsible for maintenance of the land on Wilmot that abuts Kilbourne Hills. It is city land and the city did plant some cypress trees, but the grass is not being maintained. Mark said that he would check on this problem and find out who should be cutting that area.

Mark followed up on the possibility of the getting video cameras placed in Sherwood Forest similar to the cameras that are in Five Points. He learned that unless the police want to put them in our neighborhood, we will not get them. They are cost prohibitive for neighborhoods themselves to buy and maintain.

On June 6, Sherwood Forest will hold a work and celebration day. In the morning, people will meet to put signs on the storm drains that warn about the hazards of dumping anything but water in the drains. This is a project with the Sustainable Midlands. Then at 11:30 there will be a cookout and party on the church grounds to celebrate the beginning of summer.

Mark proposed that we apply for an Action Grant from the city. The city gives these grants for neighborhood projects. Mark volunteered to write the grant and suggested we ask for funds to help with: the Fall Hotdog Cookout, the January First Night Party, our printing and supply needs, and the Summer Celebration. The deadline for the grant is May 29, 2015. The members present voted unanimously to pursue this grant.

Sherwood Forest works with the Adopt a Highway Trash Pickup program. Our next date to pick up trash around our neighborhood is August 29, 2015.

Below is an excerpt from the privately published Belser family history.

William Gordon Belser was born October 8, 1875, at the Woodside Plantation. He was educated at the Summerton High School and the South Carolina College (now University of South Carolina) from which he graduated with the degree of A.B. in 1895 with highest honors. He was President of the Euphradian Literary Society, and won the Euphradian Society medal for debate, the Roddwy medal for debate, the Carolinian medal for essay, and the Southern Intercollegiate Oratorical Association medal for oration. After his graduation form the University of South Carolina he taught school for one year (1895-1896) in Georgetown, S. C., where he was taking post-graduate work in English at the time of his father’s death in December, 1896. For the next two years he acted as administrator in the management and settlement of his father’s estate. In the year 1899 he returned to the South Carolina College for the study of law where he was graduated with LL.B. in 1900. He was admitted to the South Carolina Bar in 1900, and thereafter formed a partnership for the practice of law in the City of Columbia with his brother-in-law, William C. Melton under the firm name of Melton & Belser, and has continued  until this date in the successful practice of law in the City of Columbia as a member of that firm. He has also been engaged more or less extensively in real estate operations, having been interested in a large development near the northern section of Columbia, and in the development of sections in and around Columbia known as Sherwood Forest, Hampton Terrace, Rosewood Gardens, Suburban Farms, and others. He is president and director of various corporations, – North Columbia Land Company, Argus Investment Company, Acme Building and Loan Company and several others.

William Gordon Belser is member of Pi Kappa Alpha and Omicron Delta Kappa fraternities, of Phi Beta Kappa, and of the South Carolina and Richland County Bar Associations. He is a member of Trinity Episcopal Church. His recreational interests are particularly horticulture and gardening, and travel.

In 1909, W. Gordon Belser married Mary Elizabeth Wilson daughter of Judge John Snowden Wilson, of Manning, S. C. On her father’s side she was descended from the Witherspoon and Snowden families of Williamsburg County, and on her mother’s side she was the granddaughter of Dr. John Ingram, prominent physician of Manning. Of this marriage there are six children.